The farmers’ agitation has taken up the headlines by storm and the turning point to this road was the launch of the newspaper – ‘Trolley Times’ on December 18.

According to the eminent Indian film director Gurvinder Singh, as an artist serving the nation, ‘fearlessness’ stands out as the striking aspect of the protests. Gurvinder is working on a documentary related to the ongoing protests, ‘Trolley Times’, named after the newspaper. His idea is to explore the agitation using the context of the newspaper.

The National Award-winning filmmaker said, “We have not seen this kind of fortitude to be able to say anything against the government. This agitation seems to have given the people a platform to vent their anger and expression against the state. Right from extremely artistically refined ways to the most crude ones—one sees a full range.”

Pointing out at the unity brought about by the protests, he added, “Be it Jats and non-Jats or Punjabis and Haryanvis. Of course, the color of the agitation remains predominantly Punjabi.”

Whilst filming a documentary, a filmmaker needs to attach himself to the process and witness the developments. “However, here we decided on an inanimate thing but which represented the ideas and voice of many people. I wanted to treat the paper as a character”, said Gurvinder.

“As a filmmaker, when I went to familiarise myself with the protest, the people and varied energies there, I realized how farmers seem to have given legitimacy to the term ‘Godi Media’. At the protest sites, seeing us with the camera, many would taunt us considering we look like people who have come from Delhi or Mumbai.”

As a filmmaker, Gurvinder wants to capture real-time emotions from the protests. The shooting will resume around January 26 for the tractor parade sequence. The team had initially been to both the borders of Singhu and Tikri. The focus now is on the Tikri border.

“Both the borders might be very similar in terms of trolleys and langars being served, etc. But at Singhu, what clearly stood out was the religious fervor—the involvement of the various Gurudwaras and Nihangs. There (at Singhu), it seems as if the laws are not just an attack on farmers but the Sikh community also. Not to mention, the Nagar Kirtan at Singhu. There are way too many distractions there, unlike Tikri. We have been very clear that we want to capture the protests and not other aspects at all.”
Gurvinder is of the opinion that art and films will certainly emerge from this situation as artists across different states are capturing glimpses of the agitation.

For Singh, who recently completed his works on the film ‘Adh Chanani Raat’, based on a novel written by Gurdial Singh, it is essential to carefully document the farmers’ protest, not because it is, so far, the most organized one in post-independent India, but because its origin is where he is from. Born in Delhi and brought up in Punjab, it is next to impossible for Gurvinder to not document such a protest. Farmers’ agitation fearless, comments famous filmmaker Gurvinder Singh. 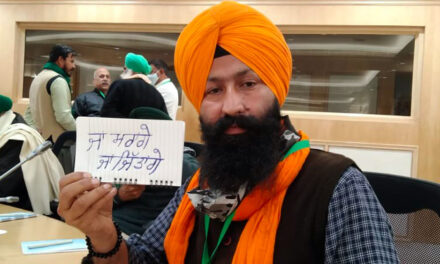 Kirti Kulhari’s Teaser Hints at The Next Season of Four More Shots Please!